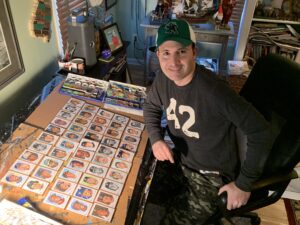 James Fiorentino (b. 1977) is an American artist who currently resides in Hunterdon County , New Jersey.

A master in watercolor his works of art have been internationally recognize which began at an early age. At the age of fifteen, James Fiorentino became the youngest artist ever to be featured in the National Baseball Hall of Fame and Museum for his likeness of Reggie Jackson.

In 1998, James became the youngest artist to be inducted into the prestigious New York Society of Illustrators, along with such artists as Norman Rockwell and Andrew Wyeth. James is also a member of the Salmagundi Club in NYC.

A graduate of Drew University where James was also the starting shortstop for all four years of his college career. He has painted for and many legends of the past and stars of today, including Ted Williams, Joe DiMaggio, Cal Ripken Jr. , Arnold Palmer, Muhammad Ali, Derek Jeter, Mariano Rivera and Tiger Woods.

James has painted and illustrated some of the most recognized faces in the world using his self-taught watercolor expression from Presidents, Nobel Peace Prize Winners, CEO’s and political icons.  His works which include landscapes, portraits, seascapes, still lifes and animals have been  showcased in museums, galleries, and private collections across the globe, and his story has been told on national television and in the pages of magazines, books and newspapers.

James’ work has won numerous awards and can be seen nationally in books and magazines and on trading cards.  James work has been featured in national products including trading cards for Topps, Upper Deck and Kelloggs..

James is also a trustee of the Raptor Trust of NJ and D & R Greenway Land Trust.